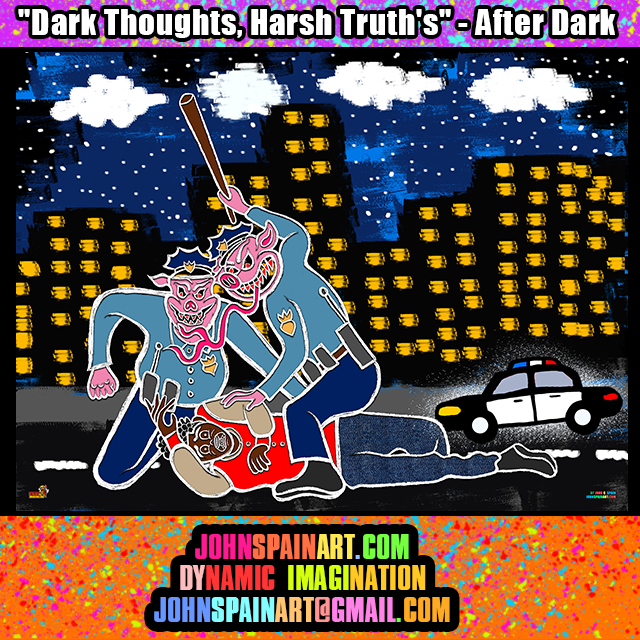 After Dark Is a piece about police brutality. Most notably of young black men in the inner city. The title has 2 meanings. After dark because the scene takes place at night after the sky turn dark but also because these of things happen in America in the dark away from the world to see.

Obviously you’re not going to ever see the police kicking young black men asses on a pamphlet for the world to see, so these activities happen in black neighborhoods in the dark and goes unnoticed. Police brutality goes back to the days of slavery in America.

This is also a hot topic in recently years after the various police shootings that been caught on tape. Which sparked a frenzy of protest and social media activism from the raw footage of from each video.

The style that I used is more simple than most of my usual work. I wanted this one to get straight to the point. The piece is pretty straight forward. 2 cops beating a distressed black man under the stars with a urban back drop of the city lights. 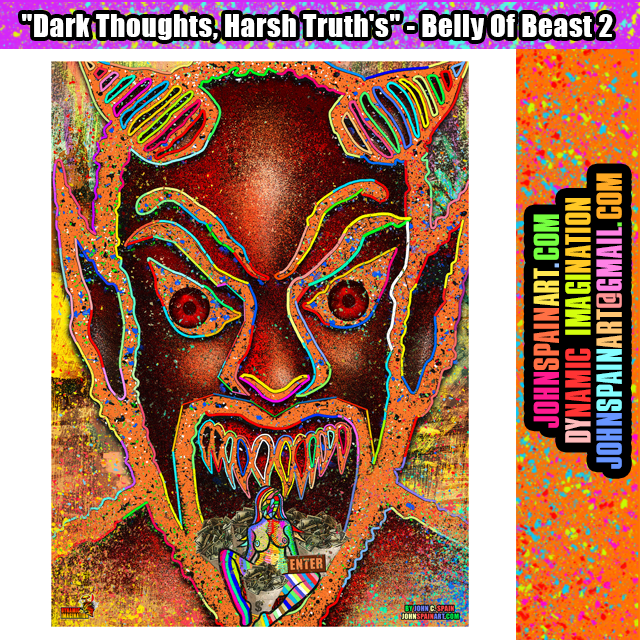 Belly Of Beast part 2 is a a little different from the first one that I made for my “Inside My Mind. Vol 2” project. This one is about how the lust for material wealth can be destructive.

When you chase the prizes of this society and sacrifice your moral values, dignity & integrity you’ll always end up in a compromising situation where you might get these items fast and relatively easy at first but it comes with a price of course. The price is usually your soul somewhere down the road. Nothing comes free in this world.

The concept shows Satan. He have a mouth full of cash and a nude sexy lady. She has a enter sign to allure the victim into the mouth of the beast. 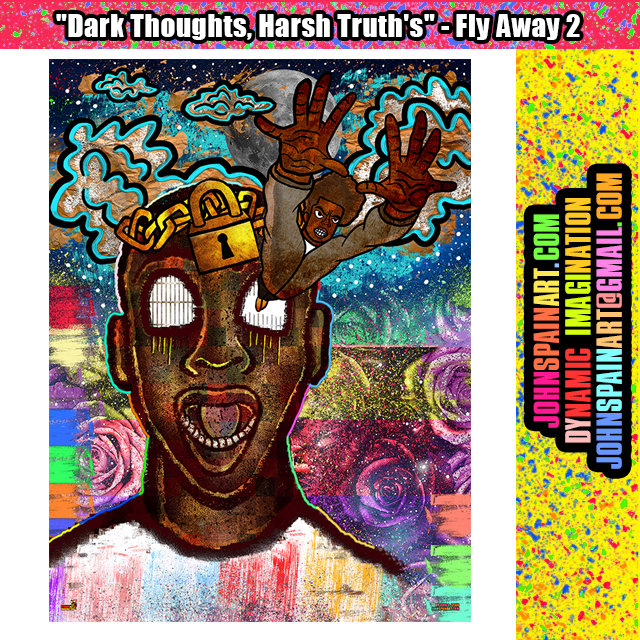 “Fly Away” (part 2) is about flying away from your own mental prison.

The image shows a guy zoned out. His mouth is wide opened and his eyes are rolled back into the back of his head. His outer shell is left standing (aka his flesh).  His mind is gone basically. Hes so disorientated from the pressure & pain of the world that he can’t function anymore. So as a result he’s mentally broken and standing aimlessly like a zombie.

Notice the chains wrapped around his head with the pad lock attached. His mind is locked. Sealed from receiving value  information that could take him out of his sleeping state.

So he’s now trapped in his inner shell. He’s a prisoner of his own mind. The jail bars represent the prison.

Second part of the image shows him breaking through the mental purgatory and flying away towards something better. 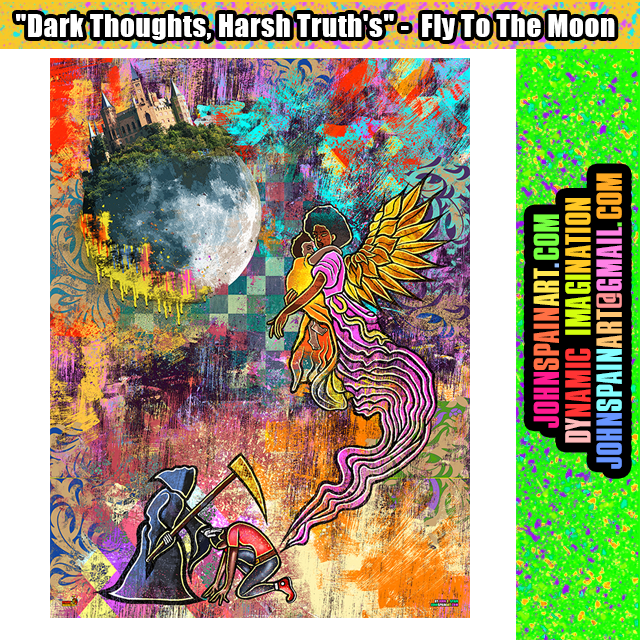 Fly to the moon is a piece that’s more spiritual. The image depicts a young man kneeling before the grim reaper (Death).

His spirit is being pulled from his body by a his guardian angel. Shes holding a baby. The baby represent his innocence. Shes taking his innocent soul to the kingdom on the moon, leaving his flesh body on earth. 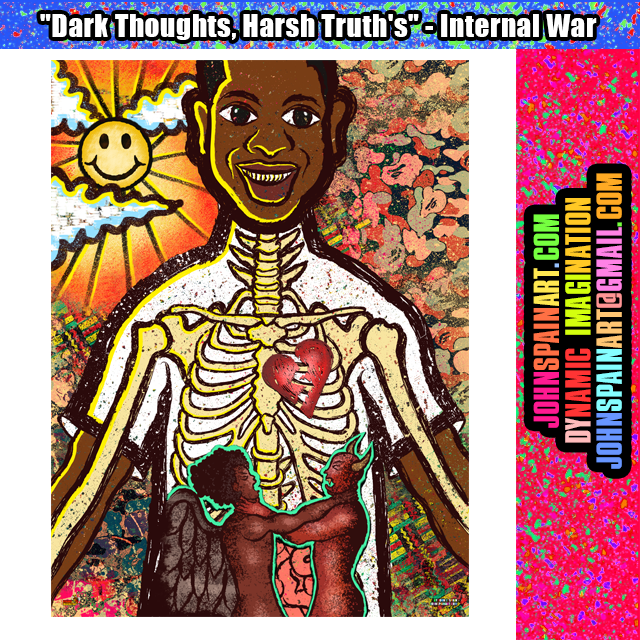 “Internal War”  shows a man appearing “normal” with a smile on a bright sunny day. On the inside hes conflicted and the world will never know because its masked with a false smile.

His heart broken from the pain he feels within. Hes constantly fighting a war between good and evil internally . The war of “Right vs Wrong” is going on inside. It’s hidden from the world and disguised with a smile. 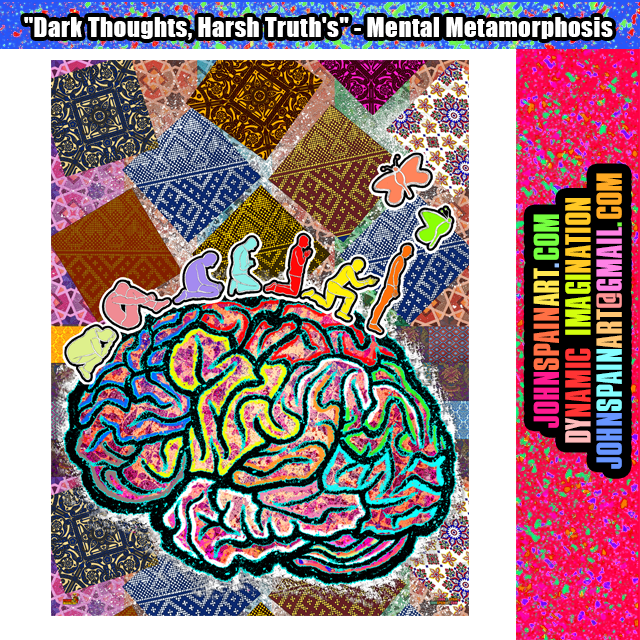 “Mental Metamorphosis” is about enlightenment and making the mental transform from a lowly mental state to a superior one.

The image depicts a brain (mind) and  man standing on top of it.

At first hes hurting and on his knees in agony . He gradually express different emotions. He goes through a series of emotions ( pain , fear, defeat, humility,  prayer, awakening and acceptance ). He turns into a butterfly the same way a caterpillar does and he fly away to his new destination with a new outlook on life. 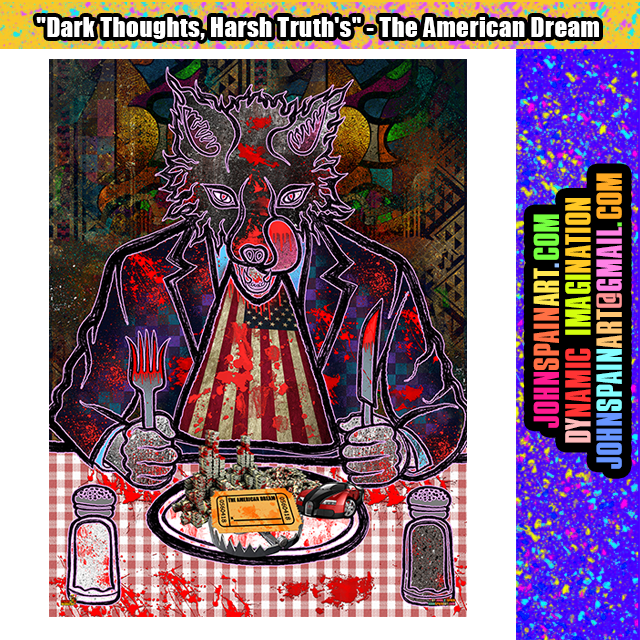 “The American Dream” is about the illusion of success and the trap of chasing material possessions exclusively.

The capitalistic “money over everything” mentality is a toxic one. Many people are destroyed chasing what they deem as “Success”. They get chewed up and spit out in the process of trying to gain the rewards of a capitalistic system.

There’s nothing wrong with wanting money because we all need it to survive or buying luxury items if you choose. But basing your whole life around and worshiping these items comes with a harsh penalty. 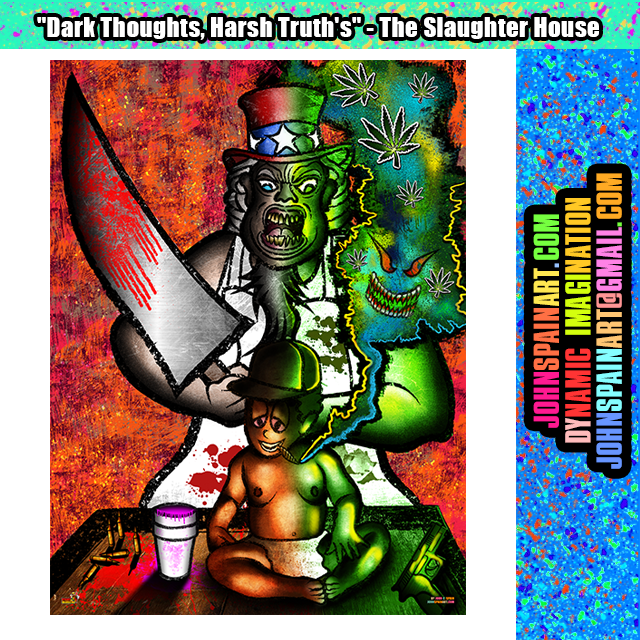 “The Slaughter House” is a metaphor about how the American system destroys black youth.

The image shows uncle Sam as a butcher holding a butcher knife with a blood stained shirt. Getting prepared to slaughter a black baby.

The baby is dressed in typical urban gear like a baseball cap. Hes smoking weed, sipping lean. Hes sitting next to a pistol and bullets.The weed smoke have evil spirits rising from the smoke.

The system is set to enslave black people. Poverty, lack of opportunities and resources tempts many to compromise their freedom and morality just to survive.  It doesn’t help that many black kids are indoctrinated with toxic media content that promote the same things that will get them locked up or killed. 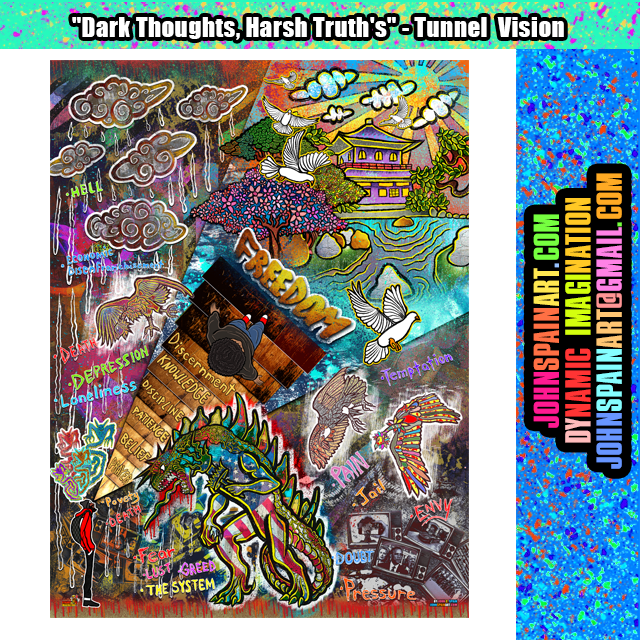 “Tunnel Vision ” is personal piece talking my journey in life and me striving for my dreams but I’m sure others can relate to this aswell.

This piece is about overcoming obstacles. It’s also about having tunnel vision when looking at your goals and not letting anything or anybody knock you off track.

The man is supposed to me. He’s at the bottom looking up his goal. Godzilla…dressed as the statue of liberty is staring down at him waiting to devour him. Hes also standing under grey clouds and pouring rain, surrounded by vultures. Above me…are the mental demons that I’m fighting while trying to achieve my goal’s. 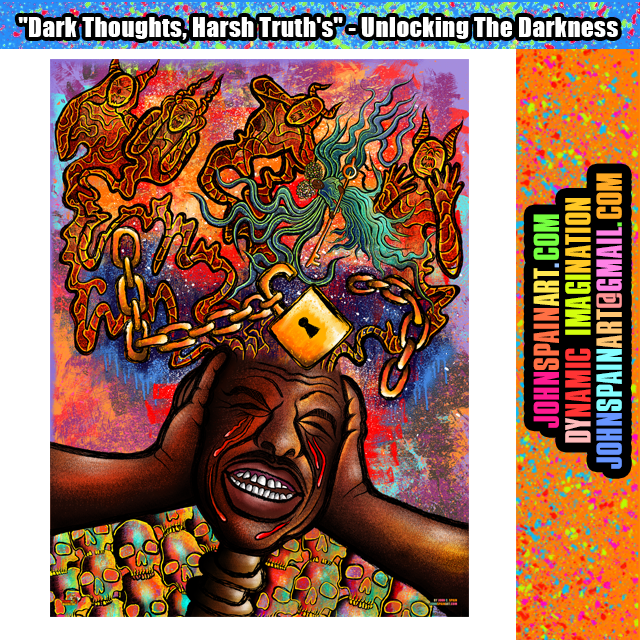 “Unlocking The Darkness” is a piece about inner pain and depression.

The man is filled with skulls which represent his inner demons. He’s in torment…holding his head in agony…while bloody tears pour from his eyes.

Up top, is his guardian angel using a key to unlock his mind and set the demons free.

This piece have personal origins aswell as a spiritual element to it. It talks about the pain some feel within and how believing in a higher power can set it free. 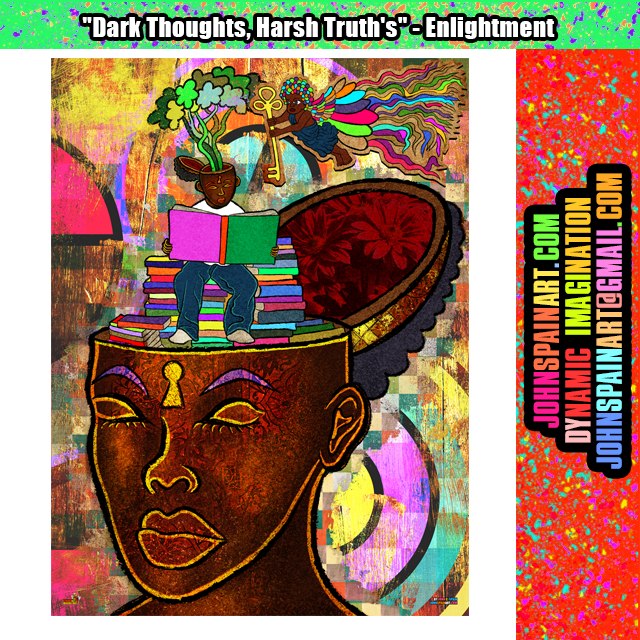 “Enlightenment” is a piece encouraging the black youth to embrace knowledge and educate themselves about how the world truly operates. Not just the bullshit they indoctrinate them with in school. This is about self education and enlightening your mind to create your own personal philosophy to help guide you through the wickedness of the world.

It’s about the importance of being righteous as possible so that you can get closer towards inner peace and god.

The image shows a large head opened with a boy sitting on a stack of books. Not only is he sitting but hes also reading one. The boy is expanding his mind  with information. His head also opened also with a lively tree is sprouting up from soil. Which symbolize mental growth.

The angel opened his mind. The angel unlocked his mind as a reward for following the path of righteousness. 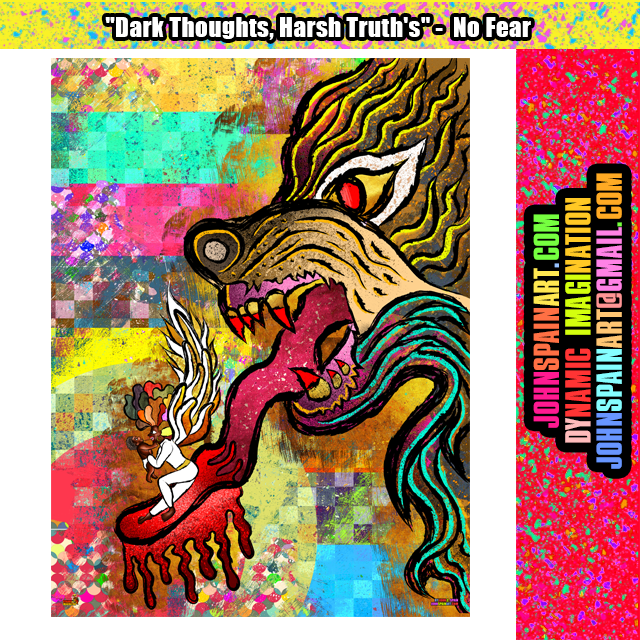 “No Fear” shows a baby being held by a guardian angel on tongue of a blood thirsty wolf.

The wolf symbolize the wicked world, the pain and ill’s within it.

The angel is protecting the child from the beast. They’re playing on the beast bloody tongue with no fear of destruction.

This piece is about how fear is an illusion and no matter how scary it may seem you have to face it in order to make it to your proper destination in life.