(Note: This song have nothing to do with with article, I just love music and like to post the songs that I’m listening to when I write. I always want the reader to feel the vibe as much as possible)

Usually when we think of indoctrination, we see it used in a negative connotation. After all it is brainwashing right? So yeah, brainwashing isn’t a good thing or is it? Maybe indoctrination was done on purpose to spare humans from the cold reality of the “real world” maybe it wasn’t just an evil plot by the so called elites to control the earth, and its resources.

Don’t get me wrong, I’m not totally naive, of course were brainwashed at birth so the “elite” can maintain order and control the earth & its natural resources BUT Maybe it wasn’t all just out an evil sociopathic agenda after all. Maybe humans need to be indoctrinated , in order to cope with the reality of life in and to keep things in order.

Sometimes I think it could’ve been done out of mercy, maybe they’re spearing us from the cold hard reality of this society, which is..life essentially have no meaning. When you dig deep to find the “truth” and peel back the layers you’ll eventually find something ugly, something unsettling, something that we weren’t meant to see purposely, to maintain our sanity and happiness during our time on earth.

Because If you’re docile and totally distracted by vanity, you won’t have the time too think about the horrors that exist. Movies, sports, music, gossip news, “chasing dreams” etc all can be distractions from reality, and reality simply is…that we live in a totally man made society that’s totally unnatural. Where everything is a facade. A society where you’re actually  punished for having an honest opinion, for being authentic. A society where you have to be a robot devoid of human emotion in order too succeed.

America economy is simply based upon who u can be the best submissive fabricator. Degrees, skills, morals…? Naw. If you want to make it in this society you have submit to the person that stand in the way of whatever “opportunity” that you’re trying to gain : Too make “IT”(whatever that means) A. perform sexual favors for the person in charge of the door that you need opened B. Play a role, and pretend to be a character that makes them comfortable or C. just become have no backbone and bow down and kiss the ring, submit to authority with no questions asked. That’s the key too that ever so elusive “American Dream” that we chase

I digress, Maybe indoctrination is a good thing, maybe the less you think and peel back the layers the happier your life will be. In this society the best slave gets the best rewards, The worst thing you can be is intelligent, honest and have a morality. In order to win in America, just do the opposite of the “right thing” and you’ll be cool hahaha. You’ll obtain all of the perks of this society.

I’ve came too the conclusion in my short life (29)(lol which is actually like 45 for in black man years, i kid kid) that in order to survive in this world and totally be happy, avoid knowledge. NEVER seek the truth, never think critical, avoid questioning anything, avoid the rabbit hole, and I’m not saying this to be an smart ass or as some kind of “witty” remark, like no seriously avoid seeking information you’re not privy to. Honestly it’s pointless, because you don’t have the power to change it anyway, and whats worse than knowing something and not being able to fix it? Its like being buried alive 6 feet under inside a coffin banging and screaming “I’M ALIVE!!!, I’M ALIVE!!!. PLEASE HELP!!!!” Only to find out that nobody is ever coming.

So just leave the truth seeking game alone. Just do whatever makes u happy and if people criticize you for being to “shallow” tell them to go fuck themselves because this game isn’t for the weak. You don’t want to be that “crazy” person talking about reality while everybody else want to talk about Kim Kardashian new dress at the MTV awards.

They say “curiosity killed the cat” and that’s a lie, really it just turned it into a borderline paranoid schizophrenic that lived  a long  life trapped in mental purgatory lol. Indoctrination isn’t all a bad thing, If people did truly understand reality, this society would be in utter chaos and plus if there isn’t any peons, unindoctrinated people wouldn’t have anybody to use for their own personal gain. In order for a capitalistic system to operate somebody have to be at the bottom right? somebody have to suffer? and that somebody isn’t usually going to be an “Enlightened” individual. So somebody that’s willing to wait out in the cold and sleep in a tent 3 days before “Black Friday” should be scarified to be the engine to keep this thing running smoothly.

(Bonus: This is why you should avoid waking up from indoctrination you don’t want to walk the plank like these guys lol)

In this article I’ll talk about the importance of texture and how to us it. The top example is a black & grey ink pen drawing. I created for my tattoo portfolio. I like to use regular Bic pen to practice for tattooing, and I never erase. Check out the 2 smaller examples, those are closer samples of texture.

I digress, This drawing in particular has alot of texture. Texture is important for realistic drawing. Things like texture, shadows, contrast and smooth shading is key to create a great drawing or tattoo.

When I created texture I use a quick and simple strategy. I add simple lines and shapes and then shade over them , the same way I would do, even If i didn’t have any texture. After, I’ll go back and add shadows in places that I feel need them .

I’m coming out with a coloring book soon. It’ll be a 100 page’s and the size is 8.5 x 11. All the images are custom illustrations freehand drawn by me.
These 3 images are from the official book. I colored them in myself and you can download them for free. The official size for each is 8.5 x 11. ENJOY!
Download Link:
https://drive.google.com/open?id=0B4IypzX61NVPeGNWaXFMOENNaWs

so soulful, so painful . . . the great AL Green

This is a illustration I made for Future “Monster” Mixtape. I wanted to create my own version of the cover art.
As usual I used Adobe Illustrator, Photoshop and the Wacom Cintiq 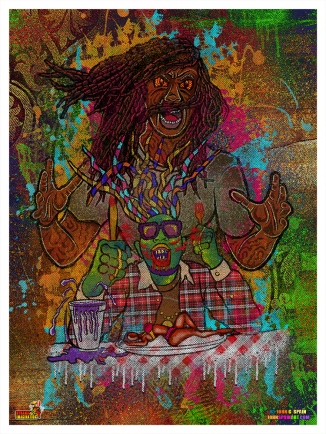